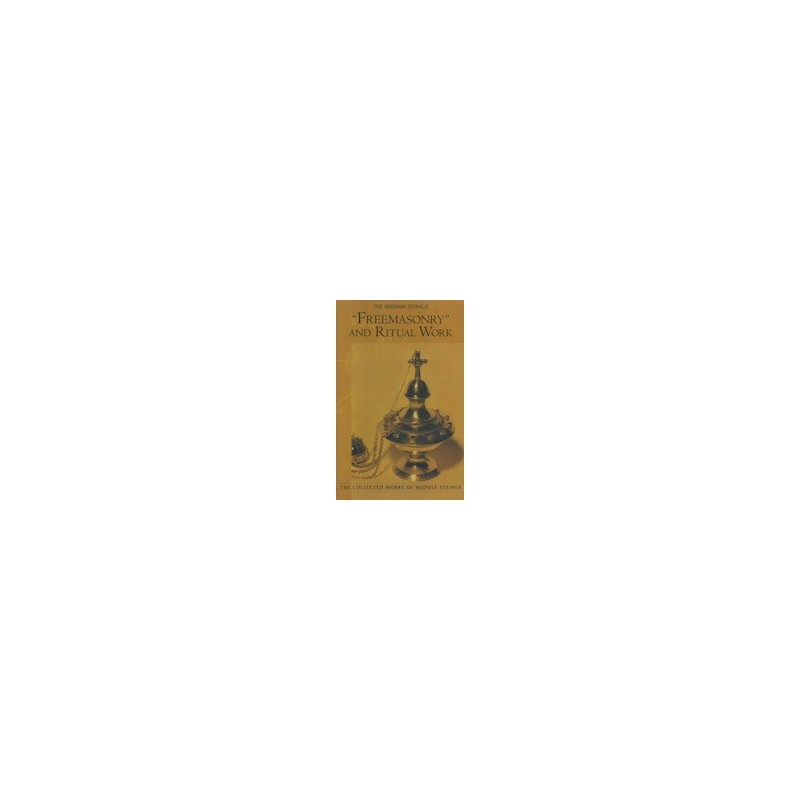 The Misraim Service - Letters, Documents, Ritual Texts, and Lectures from the History and Contents of the Cognitive-Ritual Section of the Esoteric School: 1904-1919
Steiner Rudolf

Alongside the Esoteric Section, Rudolf Steiner created the "Cognitive Ritual Section," an order connected to Masonic tradition, but independent and Inspired by Anthroposophy. This astonishing volume contains the rituals, lectures, meditations, and other instructions Steiner gave to students and members of the esoteric school. As he began to establish his esoteric mission, Rudolf Steiner chose to connect his spiritual goals and efforts with the wisdom streams that had prepared the ground for his task. For the sake of conscience, gratitude, and continuity, he determined to acknowledge those who preceded him and to relate himself to them in his characteristically free, creative, conscious, and independent way. Steiner also understood that ritual was central, even necessary, as the essence of embodied spiritual work. For this reason, he saw Freemasonry as the preeminent spiritual, non-sectarian, communitarian paradigm. He knew, too, that Freemasonry, though it appeared hollow, was perhaps the main repository of esoteric, ritual tradition and initiation remaining in the West.
Most of the guiding spirits in the recent Western development had been Masons, including Goethe, Herder, Lessing, the founders of the United States, as well as Madame Blavatsky and the other great esotericists of the nineteenth century. Although he never "became" a Mason, in 1904 the "Great Orient of the Scottish A & A Thirty-Three Degree Rite of the Order of the Ancient Freemasons of the Memphis-Misraim Rite" granted Rudolf Steiner - based on his self-evident, extraordinary initiatory status - a patent to direct his own "order" under the name "Mystica Aeterna." He received his charter from Theodore Reuss of the Ordo Templum Orientalis or O.T.O. Nevertheless, Steiner was never a member of, nor did he have any involvement with, the O.T.O. Reuss had received permission to operate the Memphis-Misraim rite from John Yarker, who, some twenty years previously, had initiated Madame Blavatsky into the same Order. In time, Mystica Aeterna became the "Cognitive Cultic Section" (also called the "Misraim Service") of the Esoteric School of the German Section of the Theosophical Society; this is the subject of this book.
The "Masonic" phase in Rudolf Steiner's life and work passed, but it remains transformed and alive in many ways in Anthroposophy as he handed it down to us today. This book contains an introduction, a chronology of Rudolf Steiner's life, and an index. This volume is a translation of "Zur Geschichte und aus den Inhalten der erkenntniskultischen Abteilung der Esoterischen Schule" 1904-1914 (GA 265).

The understanding of ritual is based on spiritual insight.

The ideal of turning the whole of life into a sacrament.

Spiritual thinking as spiritual communion, as the beginning of a cosmic ritual that is right and fitting for humanity today.

The ritual-forms created for the various groups.

I. THE INTRODUCTION OF THE MISRAIM SERVICE INTO THE ESOTERIC SCHOOL
Preliminary Remarks by Hella Wiesberger
43
Concerning the history of the Cognitive-Ritual Section.

Why the connection was made to Egyptian Masonry.

The "outer" prehistory of the Cognitive-Ritual Section.

The "inner" prehistory of the Cognitive-Ritual Section.

Concerning the constituting of the new Misraim Service.

The cognitive-ritual work is suspended owing to the outbreak of the First World War and the opposition to Freemasonry caused thereby.

Why Rudolf Steiner wished to avoid the term "secret society" for his cognitive-ritual work.

From: Rudolf Steiner: An Autobiography
100
Supplementary remarks by Hella Wiesberger
104
Marie Steiner Concerning the History of the Cognitive-Cultic section

From a conversation with Kurt Englert-Faye, according to his diary notes Dornach, February 25, 1933
105
Marie Steiner to C.S. Picht in Stuttgart Dornach, March 11, 1934
108
Three sketches for the essay: "Was Rudolf Steiner a Freemason?" 1934
116
II. THE CONTENTS OF THE COGNITIVE-RITUAL SECTION
Preliminary Remarks by Hella Wiesberger
125
About the meaning and spiritual origin of the Cognitive Ritual.

Why the Cognitive Ritual was practiced in brotherly union.

Concerning the name of the study circle.

The preparation for admittance.

Explanations of the Cognitive Ritual and the symbolism of the ritual objects.

The Temple Legend and the Golden Legend and how they figure in the rituals.

Sketches for Lodge Arrangements (facsimiles)
319
The Lodge or Temple Room
332
The Carpet
333
The Three Altars
334
The Three Candles
335
The Three Candlesticks Beside the Altars
340
The Mallet (TAO)
340
The Triangle
343
The Triangle with the Eye
345
The Right Angle
348
Compasses and Rule
348
The Cross (Rose-Cross) Beside the Altar in the East
348
The Cosmic Cross and the Golden Triangle in the Cosmos and the Human Being
351
The Two Pillars Jachin and Boaz, Otherwise Known as the "Pillars of Hercules" (The Golden Legend)
355
The Mirror
369
The Four Elementary Beings
370
The Book of Thoth (Tarot)
375
Explanation of the Temple Legend

Rudolf Steiner's Research into the Hiram Abiff Individuality by Hella Wiesberger
433
III. DOCUMENTS OF A NEW BEGINNING AFTER THE FIRST WORLD WAR
Preliminary Remarks by Hella Wiesberger
433
From the new beginnings after the First World War until the refounding of the Esoteric School as "the Free High School for Spiritual Science."

Handwritten notes by Rudolf Steiner, no date, presumably for Christiania, December 1921
460
The Solemn Disbandment of the Cognitive-Ritual Work Group in Norway, December 1921
464
From memory by Ingeborg Möller-Lindholm, February 20, 1952.
464
Esoteric lesson in Christiania, May 18 or 20, 1923 Report from memory by Helga Geelmuyden
465
Sketch by Rudolf Steiner for Professor Wohlbold, Munich, ca. 1923
467
Three Esoteric Lessons with Subject Matter from Earlier Cognitive-Ritual Work Connections, Dornach, May 27 and October 23, 1923 and January 3, 1924 Report from memory by Röschl-Lehrs
468
Concerning the Three Esoteric Lessons for the WachsmuthLerchenfeld Group(with facsimiles) From notebook Archive No. 281, Dornach, May 27, 1923
480
Notes by Rudolf Steiner for Edith Maryon on the Esoteric Lesson of May 27, 1923 (with facsimiles) From notebook Archive, Nos. 5852/5853
497
Epilogue Record of a festival for the first anniversary of Rudolf Steiner's death by Marie Steiner        501
Supplementary Notes        507
Chronological Register of Lectures        525
Rudolf Steiner's Collected Works        531
Significant Events in the Life of Rudolf Steiner        547
Index 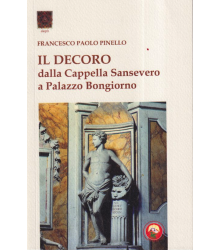 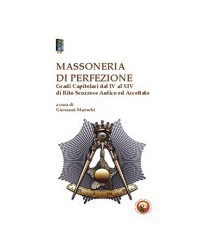 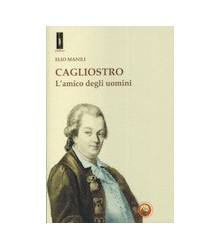 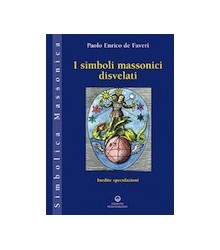 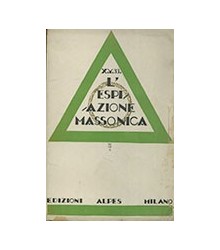 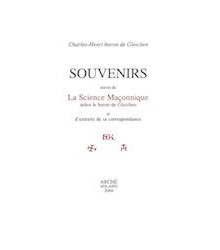 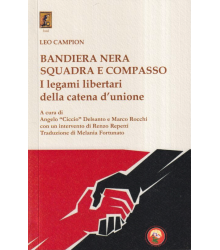 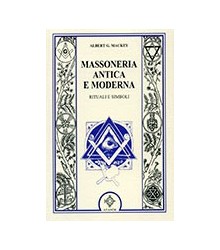 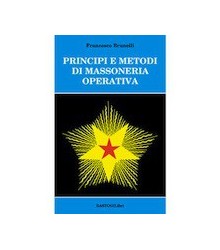 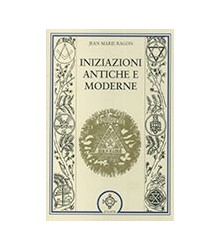 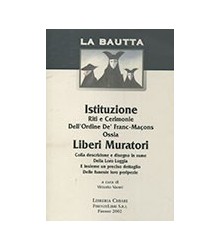 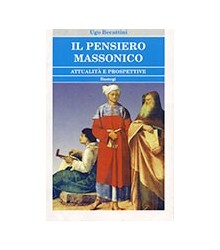 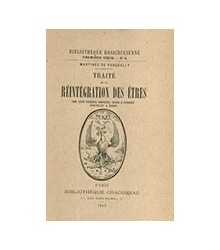 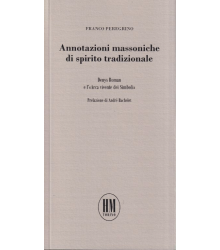